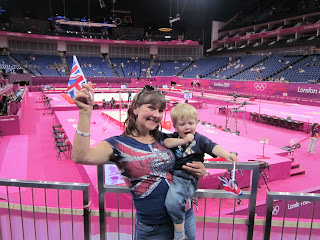 (Jane and Oliver waiting for the Olympic action to begin)

Jane Pinches is the mother of GB Olympian Jenni Pinches. Jenni started gymnastics at the age of six and last year achieved her dream of competing at the Olympic Games. Here,  Jane shares her thoughts and experiences of living alongside gymnastics and how she supported her daughter as she worked towards becoming one of the few athletes chosen to represent their country at London 2012.

How does it feel to be the mother of an Olympian? Did you ever imagine that you would be able to watch your daughter compete in the Olympic Games?

It is without a doubt a most amazing and proud feeling. As mums we love our children and feel pride in their achievements whatever they may be, but to think that your child was selected to compete for their country, on a global stage, is really hard to process at times. Because they're still your baby, the child you fed and helped to walk, and will always be that in your heart. I simultaneously didn’t think it was something that happened to normal people like me, whilst at the same time hoping it would, and working to achieve that goal. The biggest deal was we decided to re locate to the North West, where we had family, because we needed the support as Jenni's training became more intensive, and benefited from their help in many ways. But unlike when most people move, we didn’t pick a location we wanted to live in and look for schools etc we chose a gym then built everything around that. It turned life on its head but it was just another way of looking at things. The main difference I believe is that we didn't see Jem's gym as the main or only focus of our lives. We had a life outside of the gym that was separate, and helped to ground everyone. Whilst gymnastics permeated every part of our daily life, it did not consume it. However, it became part of Jenni and part of us so I wouldn’t describe it as being a chore because it was just life for our family!

Did you get a chance to go to the Games or were you following the action on TV?
I was very fortunate to be given a ticket by Proctor and Gamble for the qualification and team final rounds. I watched the rest of the action at home with the nation!

When did you first realise that Jenni had something special?
Jennifer was a very early walker, could vault out of her cot from about the age of 8 months and was competent enough to climb trees and park equipment on her first birthday. I always thought she would be good at gymnastics but there was no club where we lived in Kent. When we moved to Bristol she was home schooled for a few weeks as we had to appeal for a school place and she drove me mad leaping about the house!! A booklet popped through the door with information about the local area and I read that there was a gymnastics club nearby. I knew Jem had said she'd like to try so we both leapt at the chance. After just one session, when they asked me how long she had done gymnastics for, I knew she was something special.

How have you had to adapt family life because of gymnastics?
We fitted around gymnastics like you fit around anything that you choose to do in life, you incorporate it into your routine. It meant we couldn’t go away for weekends, couldn’t just take holidays when we felt like it, and eventually that became a 1 week holiday a year.
Jennifer's brothers spent a great deal of time hanging around gyms, travelling to and fro and going to competitions. Harry and Oliver just grew up with it, they knew no different. They both became adept at sleeping in the car, and endured long journeys and repetitive trips out and about. Oliver was just days old when he first made the 3 hour round trip to Liverpool! They might have to stay up later than their peers because I was collecting Jem from evening training for example, and in fact the older boys both did trampolining because it could be done at the gym where their sister trained. (They have both been very successful in this, and still train and compete.)

How have you managed to keep life ‘normal’ for Jenni and the rest of the family?
Our life is, and was, "normal" because everyone's life is normal to them. The children never felt like they were odd, just different; but then every family is different. We knew enough people within gymnastics so that everyone had someone who could relate to what was going on, but life was never a big deal, and all the children have had the same level of support for their activities as Jennifer had for hers.

What has been the hardest part of living alongside gymnastics?
The hours, the intensity and the travelling affected everyone and was tough. But for me, I think the relentless pressure of competitions and selection, always keeping up and getting better, never being able to take a breather because there was the next goal, the next level, was the hardest - for Jennifer, and so for us. Added to this was the constant worry of injury. Jenni had her fair share of them, and this also meant activities like skating, skiing, even cycling had to be missed. Always being fit and coping with fatigue was tough too.

Were you nervous when you watched Jenni compete?
I was always nervous because I wanted her to show what she could do, and there's always the potential for a fall or stumble. In this respect, it became beam that I was most nervous to watch. I knew Jem got nervous too, and would speed up! I knew that if she stayed on, you would see her skill and beauty but falling off is so easy!
That apart, I loved watching her compete and my nerves never got the better of me or spoiled that enjoyment. I always loved to watch her on floor where she performed her routines with elegance and fun!

What is the most important thing you think you have taught Jenni?
I'd like to think that she learned that to strive for a goal is important, however difficult that may seem to be; to always try your very best, be the best that you can be; and never, never give up. That you play to win, but winning isn't everything.

Have you any advice for other parents whose children are involved in gymnastics?
Think carefully before you decide to commit. The road is long and hard. Most will fall by the wayside. Support, support and support, and try to grow a champion! But also know when to stop and make sure it is your child's dream and not just yours.

(Jenni performing on floor at the 2012 British Championships)
Posted by Gym Fan Blog at 13:52