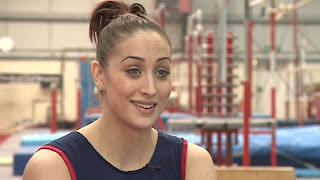 Lisa Mason has been setting records throughout her gymnastics career, with many British 'firsts'. She was the first British gymnast to qualify to European and World Championship finals and the first to take a Gold medal on the World Cup circuit. But this year Lisa has done something many people believed to be impossible - she has made a comeback after 13 years of retirement and is competing once again. Here, she looks back on her GB career 13 years ago as well as looking at the present and her future in gymnastics.


What prompted your decision to retire after the Sydney Olympics?
My generation were the first team to ever send a full team to the Olympic Games for GB so the pressure we had leading up to the Olympics was so intense that when it was all over I just wanted to be a normal teenager.
When the opportunity of me coming back arose in 2004 I fell pregnant so was unable to fulfil the plan of coming back into gymnastics.

What were your highlights of competing for Team GB before your retirement?
Wow, there are sooo many . . . I would say the main ones are:

What has life held for you since you retired from gymnastics?
Well first and foremost I am a mum to a beautiful little girl named Yalarna she is about to turn 8 on 15th May, she is a little gymnast herself but I don’t push for her to do it seriously as I want her to find her own path.
I have also trained up as a Senior Women’s artistic coach and have my own Choreography business where I travel to different clubs up and down the country to do Beam and Floor workshops / sessions and I also choreograph floor routines, which is a real passion of mine.

What changes have you seen in British Gymnastics since you last competed?
It’s more professional, technically more advanced and the support that the gymnasts receive now is great . . . from physiotherapy, nutritionists, to skill break down.
And we are “as a country” a force to be reckoned with. Louis and Beth have both paved the way for this next generation and set the standard in both women’s and men’s gymnastics.

How does it feel to be back in competition?
It feels awesome!! Nerve racking lol but good . . . gymnastics has always been part of my life and always will be, I love to perform and I am hoping to introduce floor back into my training schedule so fingers crossed it all goes well and I can get out and strut myself on the floor again lol.

Has the sport changed much since you last competed?
Not really . . . I think it lost a lot of its artistry in previous codes but with this new one it’s taking things back slightly to the old school which I love, with the deductions and awards for artistry etc.
Bars has come along the most I think the difficulty of some of these girls' routines are really impressive.

How did it feel to be crowned English vault Champion in your first competition?
Amazing!! Didn’t expect it at all . . .

What was your experience like at the British Championships and competing on podium again?
A lot more nerve racking than I remember lol . . . I think a lot of people expected me to just come back and be on top after 13 years lol and they forget I have to re-learn everything including how to cope with competition nerves.
Vault for instance, I’ve only been working Vault since Christmas so 3 months isn’t long at all so I am proud that I made finals at the British.
Also I’m used to working on the old style Vault so changing my technique for this new Vault has been quite challenging.

What are your next steps in your gymnastics career and what aims do you have?
To get back into the gym and work new skills for my routines!
I’m starting to introduce floor when I get back in the gym . . . my coach has given me a few days off lol.
I’m due to compete at the Pro Gymnastics Challenge in the United States this May which I am SOOO excited about!!
Then the British Teams also in May which hoping all goes well I’m going to put out floor, after then, mmmm not too sure . . . I take each day as it comes and hope for good health and happiness for my daughter and myself.

What plans do you have for the future outside of competitive gymnastics?
It’s always been my ambition to move out to the USA or Canada and coach out there, maybe some t.v work . . . anything is possible, only God knows what’s in store for me.
I count my blessings everyday and I am so grateful for a second chance at this and I just want to try my best and be successful at whatever I do for my daughter and my future.

Lisa's winning vaults at the 2013 English Championships
Posted by Gym Fan Blog at 17:05