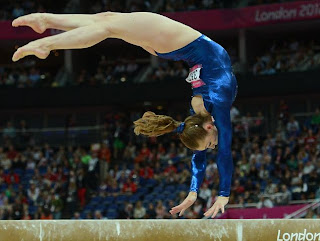 Jenni Pinches has been a regular member of Team GB for many years, representing her country at various European and world events, and this year was selected to be part of the GB Olympic Team. After an amazing Olympic year, Jenni announced her decision to retire from gymnastics. Here she looks back on her career as a GB gymnast and looks ahead to a future after elite gymnastics.

2012 has been an amazing year for you. What have been your highlights?
This year has been incredible so I am going to have to pick a few highlights. It was a long and difficult rollercoaster ride for the first six months of this year as I strived to be part of the Olympic team: difficult enough of a task in itself without adding injuries, personal life problems and stressful school exams to the equation! When I finally did make that team I was delighted, obviously, and I found the entire Games to be overwhelmingly brilliant, as you can probably tell from my reactions during the competition. Not only did we break the Olympic record for GB women's highest ever result but I also got two PB scores in the Team Final and got to meet and/or hear the support from thousands of fans in the crowds! The atmosphere was electric, a real buzz, and I was buzzing long after the Games ended. The Olympic Games left me memories that I will cherish forever. And then my year didn't even stop there!
Other highlights which followed included the Olympic Parade of athletes in London and my trip to South America to volunteer. I went to Ecuador and spent two months building, teaching English, conserving the environment and rescuing local wildlife in small communities near the Cloud Forest, in the Amazon and on the Coast. I made some friends for life, whilst achieving something quite different to an Olympic placing, but just as impacting - something that wasn't only for myself, but will really benefit people's longevity and well-being in their community. The trip was a lot of fun, allowed me to glimpse some really beautiful parts of the planet, and broadened my perspective on the world.

What was the overall experience of the Olympics like, being in the Olympic village and meeting the other athletes?
The Olympic Village was like a virtual world someone had created, it was surreal. Everything worked efficiently and perfectly. We stayed in the Team GB block, overlooking the Olympic Park, stadium, the Orbit and much of London which was a stunning view. Outside the accommodation, (which was simple yet fairly stylish and homely by the way) the most talented athletes ever were just everywhere you looked; amongst the always-cheerful volunteers and always-helpful soldiers keeping the place feeling secure and organised. Everywhere was friendly, everywhere was clean. It was a welcoming and relaxing place. And then there was the food court with drinks and foods and available from all over the world, in unlimited quantity and at any hour. It was a village impossible to be realistic beyond the powerful few weeks of the Games. But it was great while it lasted!

You announced your retirement just after the Olympics. What prompted this decision?
I've retired because I achieved everything I wanted to achieve and was satisfied and looking forward to other things in life. I didn't have enough motivation to dedicate my life to training any more. I got my goal and I am so happy! But you need absolute drive and passion to succeed and for me it's all or nothing. I commit to a goal and do everything to reach it, even if I hate it, and never give up, or don't start . . . some competitive instinct to achieve.

Have you got any plans to carry on with gymnastics in any way in the future?
I'm not leaving touch with gymnastics, hopefully, just changing roles - visiting upcoming gymnasts of the future in little clubs (I love it!) and maybe a bit of commentary/media work for all the fans of the sport to get better access.

What are your future plans for life after gymnastics?
I dunno. I am happy doing my A Levels now, giving motivational talks and then just regular stuff! I am still working on my Ecuador blog but will let you know how my charity work in South America went, soon.

Which gymnasts have been your inspirations, both British and worldwide?
Aliya Mustafina (her beautiful gymnastics), Shawn Johnson (I can relate to her style and personality better than others), Beth Tweddle (she has mentored me and been an inspiration my entire life, how she is unfazed by setbacks and totally committed to training).

Jenni's beautiful gymnastics will be greatly missed, but I look forward to hearing much more from her in the future (starting with live tweets from the Glasgow World Cup this Saturday, 8th December) and would like to wish her every luck in all her future endeavours.
Posted by Gym Fan Blog at 08:41