Imagine spending your whole life dreaming of the one thing you want to achieve. Imagine spending the last four years working hard to achieve your goal. Imagine spending weeks and months training so intensively as you get one step closer. Now imagine you are told you are going to London - as the reserve. You still have to keep preparing and training but knowing that you may never get the chance to show off all the hard work you have put in at the world's most prestigious sporting event.

Being named as a reserve must be one of the hardest things in sport. To know that you were so close to making the team and still having to put the hard work in alongside the team members seems to be really tough.

The USA has struck me as having a really positive attitude towards their alternates. The three girls named have been treated as members of the team and the hype surrounding them has been almost as great as it has for those who made the team. Surely to be acknowledged in this way must make it a lot easier for them. But in the USA with such a strong field to choose from, making it as an alternate is a big achievement in itself. When you consider that such gymnasts as Alicia Sacramone, Rebecca Bross, Sabrina Vega and Nastia Liukin haven't made the final cut, Elizabeth Price, Sarah Finnegan and Anna Li have a lot to be proud of.

In Great Britain though, I do feel incredibly sorry for the reserves. The fact that it is a home Olympics has made it all the more special and everyone desperately wanted to be one of the five who made the team. The GB reserves do not even get the luxury of travelling which must surely add to the excitement of those coming from further afield. What's more, the GB gymnasts have been very closely matched this year and I can only imagine what a difficult job the selection committee must have had as I don't know anyone who thought that they could accurately predict the team. Any one of nine gymnasts could have legitimately made the team which must make it all the harder for those who did not.

There is also the thought though, that while some of the girls will be understandably upset to be a reserve, there are others who have exceeded all expectations in their achieving one of the three reserve spots. To those who only had an outside chance of making it, the opportunity to be on the team is something that they will savour.

But being a reserve does not necessarily mean that you will not get the chance to compete. Imogen Cairns was originally named as the reserve for the 2008 Beijing Olympics and got to compete there after an unfortunate injury to Laura Jones. In the 2011 World Championships, Anna Li replaced Alicia Sacramone due to her Achilles injury though technically, Alicia was still named to the team. And earlier this year at the European Championships Ruby Harrold was called in to replace Imogen Cairns, earning herself a place in the bars final as a result.

It has to be said that earning a spot on at the Olympics, whether as team member or reserve is a massive achievement. It is a result of great talent and many years of hard work and all of these wonderful gymnasts deserve to be celebrated. Congratulations to you all and good luck! 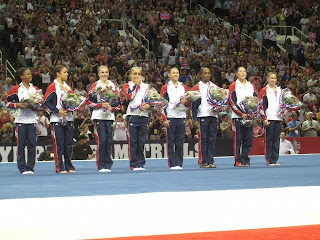 (All 8 members of Team USA celebrating together)
Posted by Gym Fan Blog at 09:38